The task of achieving low return temperatures is made difficult by the need to maintain high enough temperatures in pipework to respond to immediate DHW demand. This function, referred to as a keep-warm or trickle flow, needs to also satisfy a Legionella duty of care, ensuring water does not remain at low temperatures for lengthy periods.

HIU technology using mechanical controls relies on valves being manually setup (and ideally locked) at settings that meet both load requirements, while maintaining low return temperatures. The least efficient (and hence most costly to the user in terms of energy costs) is to use a by-pass that passes a low flow rate of hot water from the flow to the return. The fixed flow must as a minimum cover HIU and pipework losses and results in return temperatures similar to flow temperatures. Across a whole site, where 95% of units are not running taps at the same time, the majority of return water to plant will be bypass flow, destroying return temperatures.

A thermal bypass, or use of a mechanical temperature control valve on the DHW, relies on the sensor loosing temperature to open the valve and allow a small flow of water through. As with nearly all mechanical control loops however, the valve characteristics and rate of sensor response to changes in primary flow and temperature makes a massive difference, and it is normal to see cyclic reheating rather than a steady very low flow equal losses. As soon as the smallest cycle is introduced into a mechanical system, the control valve will close in response to higher temperatures. Given heat losses of pipework are greater than the plate heat exchanger (a solid insulated thermal mass), by the time the DHW sensor (mounted into the PHE) has cooled enough to open, the pipework is considerably cooler. As this colder water then enters the PHE, the valve opens further. Flow increases until heated primary water reaches the PHE, and continues (now with very hot water flowing fairly rapidly from flow to return) until the sensor react - up to 30 seconds later. The system overshoots until the sensor again closes the primary valve in response to the elevated temperatures and the cycle continues. The vast majority of flow through the system is at temperatures far higher than is required to maintain losses, and the rapid fluctuations in flow and return temperatures can influence heat meter readings.

An electronic control system has the ability to work out the average losses from the pipework and combine this information with the system temperatures to accurately control average flow through the PHE to perfectly match heat losses. Electronic systems are also much simpler - with only one control valve (that can be exercised) to perform all functions, where a decent mechanical system would require temperature control valve, differential pressure control valve, return temperature limitation valve, and possibly a separate thermal by-pass valve to achieve arguably comparable performance. Each valve different, requiring space, cost, spares, and introducing extra possibilities of a wrong setting that inadvertently destroys return temperature performance. 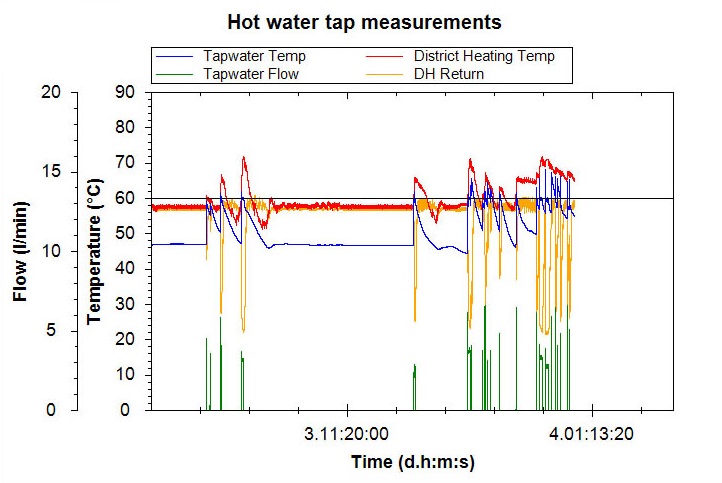 A key point to notice is the primary flow temperature in red during keep warm periods between draw-offs. It remains below the DHW setpoint, very close to the return temperature. This is because the heat losses from the HIU will always be lower than local primary pipework losses, so the unit regulates to a primary flow that just maintains DHW readiness. Lower HIU (and local pipework) temperatures results in even lower heat losses, as well as improved meter accuracy.