A selection of some interesting research and development projects we have undertaken over the past few years.

Training Area One (of at least ten), with array of biomass including pellet boilers, wood gasification boiler, wood burner, heat pump, solar thermal feed, and a thermal store at the heart feeding onto loads. 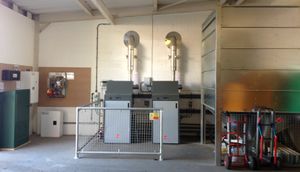 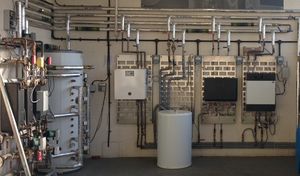 Testing is the basis of research and development, and in order to test system properly you need a decent test rig.

In 2014 we decided it was time to design and install more advanced test facilities on our factory that were capable of investigation as well as simple product testing.

We had plans to see what can be done with the latest open-source electronics, to look into biomass boiler efficiencies, and to push the envelope on district heating design. Our sister company across the road, Specflue, runs the country's largest biomass and renewables RHI training centre, and as such had a large array of boilers to connect up as working system, both to heat the buildings and run the training courses on.

Their training centre design has been designed, built and extended around have the goal of having one of everything, rather than your typical heating system, with 5 permanent biomass heat sources, solar thermal, a heat pump, and a few temporary ones when testing new boilers. Also, radiators and underfloor heating as well as an assortment of buffer stores from the small ones to the big ones, to rectangular ones - all selected to provide installers with the best quality training we can. See Training Courses. In summary, a perfect challenge for testing kit our systems on, alongside the factory rig, for training and demonstrating the states of the arts. Our end of the Specflue rig was designing the control philosophy, thermal store design and build, and monitoring/control applications.

Our own factory test rig, was not so much aimed at having an array of permanent installations, but rather a solid but challenging plant room, a working heating system that could enable load testing, a single buffer that allowed us to vary its effective volumes, and a testing area that allowed just about any system to be easily connected up.

For the plant room we went for a twin biomass pellet boiler system that would need to allow for a portable cabinet boiler house to plug in externally. The easiest approach would be gas LPG boilers, but that would not give us the test rig needed to advance understanding of biomass and the control systems for them. We also wanted to go for RHI, for more educational rather than financial reasons - we wanted to be able to improve and teach exactly how best to setup and operate a small scale biomass plantroom on district heating.

The rig has been in use now for over 2 years, and is invaluable to all aspects of our research, development, and training. It is in our view a jewel in the industry, and one we are trying to use as a basis for setting up the UKs first approved installer courses for district heating - currently there are none and general installation quality in the industry is ghastly. We wish to do something about that, as it benefits us as manufacturers when our equipment is installed and maintained properly.

There is no doubt Linux based systems are important to us all, even if we don't realise it. With most of the World's fastest super-computers running on Linux, as well as routers, open source electronics and a colossal array of products. Its an open-source operating system that's free to use and develop, and is contributed by thousands, including IBM.

So to have such a platform available in the form of a £45 mini computer that can connect to just about anything, and should never go obsolete - as the basic system is Linux - is in need of serious research. These technologies are new to us all, and the boundaries they can be pushed to are amazing us all. The Internet of Things is a phrase that attempts to capture the movement towards this technology - one that also enables a nine year child to program computers.

Our initial research into Linux focused on the available platforms out there. The usual process would be to buy and play with a circuit board on the market that forums inevitably led towards. Arduino, Raspberry Pi, and BeagleBone systems to name the main contenders.

We looked for a balance between function, cost, quality, ease of use, support levels, compatibility, and supply lines. We wanted to find that system that was used in the millions and we could connect to whatever we wanted, and do whatever we could think of in terms of software. Such systems sound too good to be cheap, but research proved otherwise. Both the Arduino Yun and Raspberry Pi ticked all the boxes, but each offering its own advantages.

The Arduino has two types of processor so can connect directly to a wider range of sensors. The Raspberry Pi has however a truly powerful machine, designed and supplied by a charity, used in education, and with books and magazines in every newsagents.

Possibly the biggest obstacle to our move into Linux systems was a lack of knowledge about their abilities. Once we learned they are full blown web servers that run PHP web sites - the same as our existing online systems - a world opened up with the ability to run web sites directly from our products, no need even for the internet. We could use the same user interfaces both online and offline.

Research into Linux systems has led to Python - a software language used extensively in embedded electronics. To properly use Linux you needed to know Python, so this is possible the single most time consuming task undertaken in house - becoming competent enough in Python to deliver working software that can be tested for reliability and used in products.

The Python codes we have developed have now become a cornerstone of development and our technology. They enable third parties to easily implement functions we have developed, driving cross-compatibility in a way never seen before.

Th best example of Python code we have developed are open-source functions to connect to the Energy Saving Trusts EMBED database. This was to assist Ofgem in delivery a low cost contract-free monitoring platform for RHI schemes. We sit on DECC / Ofgem industry RHI steering group and in two years of meetings only a couple of schemes were ever monitored despite cash incentives by Ofgem in the for of the MMSP scheme. We saw the barrier as a lack of available contract free systems that an installer could deploy with minimal effort, so an open source system was the way to go. We worked alongside the EST programmers and developed the functions needed to connect the twin biomass boiler system in the factory directly through to EMBED. See EMBED.

One area we researched using our new abilities was looking into what new sensors were now at our disposal, having a system with USB ports, WiFi and Bluetooth. The sensory journeys we have been on are many, but one example that opened our eyes was the use of a webcam. A very cheap device that gave us access to images. Nothing special, but combined with a desire for us to investigate efficiency levels on biomass boilers, we wanted to see if a camera pointing into a hopper could offer a cheaper yet more powerful and reliable fuel level sensor.

And it works. You can take a photo, run the saved image through a function obtained via open-source that reports the number of pixels within specified colour thresholds, and estimate the level of fuel. 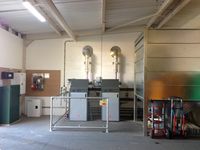 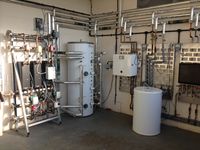 One of our many goals in R&D was to properly understand how biomass boilers operate most efficiently.

The reasons were twofold. Firstly we manufacture thermal stores to connect to biomass boilers, and lead the industry in this technology (since the 80s). We need to know everything we can about the systems people connect our stores to and how best to manage them. Secondly, our sister company Specflue is not only the UK largest HETAS trainer, but also distributes more flue and boilers to the biomass industry than anyone. Raising awareness to the industry of best practice in biomass is their company motto.

We had at this time a fully installed biomass boiler system, buffer store and test rig capable of running tests on, and developing control software to run on the Linux systems.

The initial area of research into biomass concerned the mechanisms for firing up boilers from a thermal store. Efficiency can be significantly affected by turning boiler or or off prematurely, and with cylinder thermostats and temperature sensors both in use and offering differing features, we worked through the benefits of the options available. Having a number of sensors now connected to the biomass boilers, we could graph at 30 second resolution a days operation, and easily see how different sensor settings and positions effected boiler cycling and general efficiency.

A key target has been accurate measurement of boiler efficiency. Heat out relative to fuel in.

We can measure heat out on a heat meter, so our main focus was on measuring fuel in to arrive at an efficiency calculation over a minute timescale - rather than counting energy use between hopper refills.

Methods we developed included direct measurement from auger motors through to spectral analysis of photos from hoppers to determine fuel use. We found that measuring an Auger gave us best instant reading, however needed to be calibrated over a longer period between hopper refills, so the total fuel readings from auger readings match physical fuel deliveries.

The system has now been linked to the Energy Saving Trust's EMBED database now for over a year as our example of how biomass systems can be kept efficient by simple monitoring.

We have deployed systems into the field also, and on many occasions have used the technology to discover errors that have resulted in poor efficiency but were not obvious until temperatures of a full days operation can be studied. Some systems, despite going in as temporary measures have been left in place, at the occupants request, to give them the ability to maintain operation at peak efficiency while sitting in front of their fireplace watching the temperatures change on a tablet schematic of their system.