The Active Hydro range of stoves were sold by MCZ with two different circulation pump options: A Standard type pump or a High Efficiency (A Rated) pump.

There are two crucial differences between the two variants:

The reason for the difference is due to a characteristic of an HE pump not seen in the Standard variant. When a modern high efficiency pump is energised and starts to turn it can draw, for a fraction of a second, a relatively high current that is many times in excess of the current that it draws when running in normal, steady operation. This brief draw is known as an Inrush Current and albeit that the duration may be around one millisecond, it can be in the region of 2-3 Amps drawn, depending on ambient air temperature, water temperatures, viscosity of pumped medium, etc.

The Standard pump variants of the stoves deliver power to the pump from the mains power supply that is drawn through the main motherboard, on through a smaller Daughterboard and then via a small relay, passed to the pump when the stove logic determines the pump should run. Because of the potential strength of the inrush current, for High Efficiency versions the power to the pump is drawn directly from the incoming supply at the rear of the appliance and through a power relay on the Daugherboard. This eliminates stress on the inbuilt components & circuits on the motherboard and prevents damage to the smaller type of relay used on the standard variant.

When sourcing and installing a replacement motherboard on these appliances, it is imperative that the correct type is used as either the appliance will not work (pump will not run) or the pump may run initially, but then damage the motherboard beyond repair.

A simple way to ensure correct identification is firstly to check the COD number on the barcode label inside the pellet hopper. This identifies the specific model of any MCZ / Red 365 appliance:

From this, the correct version of Motherboard can then be selected. The MCZ product codes for the two variants are:

Further confirmation can be found by physical identification via the complete motherboard assembly. Attached to the main board is a smaller mini ('Daughter') board, to which the pump's power supply is connected. A picture of the two variants is show below: 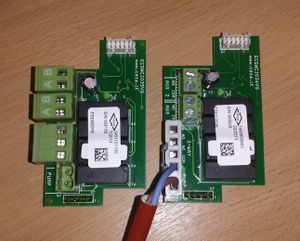 Active Daughter boards: The High Efficiency version is on the left and the Standard version is on the right
Retrieved from "http://heatweb.co.uk/w/index.php?title=Active_Hydro_stoves_-_Standard_Vs._HE_Pump_motherboards&oldid=1822"