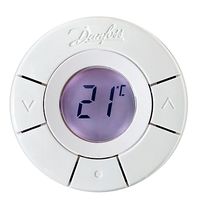 Z-Wave is an wireless mesh network technology that brings a wide range of products together under standard protocols.

The attraction is you can add numerous remote sensors and switches, from a variety of manufacturers, to your system without any wiring. This makes the system software controlled, rather than hard wired, increasing flexibility and adding the functions of remote monitoring and control.

From a systems builder perspective, it enables us to supply a standard hard-wired system that is easily expanded on. For example, when supplying a hard-wired system, we would ask how many central heating zones, and the wiring would need to allow for that many zones. We also need to hard wire timeclocks to the appropriate channels, using relays to cross-control circuits.

With a wireless system, we can set this up in seconds on the commissioning screen - a web page driven by the system itself and accessed through WiFi on a phone or computer.

If a customer feels the system is not working perfectly, then there is no need to send someone to site. We can just have a look at the historic data for the system and see what the problem is. Then fix it remotely, or at least have the data needed to ensure that only one visit to site is needed.

Settings will be dampened by system to avoid continued over-correction, so someone who sets once to 18C, and afterwards to 22C, will cause the system to target 20C.

This last example demonstrate how one could setup a daily program for the system on each radiator valve, and could be used by an installer during commissioning to end users requirements. This chained behavior van be switched on or off. Default is off.

The basic theory for working out settings is based on recording room temperature and humidity at a central location that will see an average, as well as radiator temperature adjustments, and recording this against the external air temperature and time of the week, in 30 minute slots.