The following problems all cause considerable problems in the real world for the efficient operation of an HIU and the network it is connected to. Electronic controls allow us to fix them all:

More than one function per control valve

With mechanical systems, each function requires a separate valve, or components within a valve set.

Electronic systems allow all these functions to be applied using a single control valve, with the following advantages over mechanical systems:

An electronic system is time aware.

It can adjust its mode of operation at different times of the day, or even adapt its timing. This adds functionality such as:

An electronic system can log sensor and performance data for future analysis.

By no means a necessity, when everything works perfectly, but when it doesn't, or to be sure it is, then this data is invaluable.

Five years ago, when we had a telephone call of a problem on a site and we need to attend, we would need to send an engineer. Today, we can simply login to the system and tell them to check their secondary return pump as its failed (for example). We can tell them when it failed, and how it failed.

In a commercial plant-room something as simple as a pump failure can take up significant resource, just to diagnose, traditionally. First there is the process of failure, with the resulting loss of services (hot water for example). The discomfort this causes results in complaints to managing agents, landlords, and plumbers, that can be followed by an entourage of personnel poking around in properties and plant rooms until someone suitable qualified or informed works out the problem.

With an electronic system, both the user, equipment manufacturer and the appointed service engineer can receive emails and text messages immediately upon failure, and they can even be notified in advance of the failure if the pump performance is been monitored.

With electronics now built in as standard to HIUs, the same functionality can be applied on a domestic level as well as in plant.

The most common been blockages in pipework, blocked strainers, open flushing by-passes, and undersized pipework. The data simply cuts through all the arguing about whats wrong, where, who's paying to fix it, and can't we just try this, with the facts.

Boiler plants communicating with distributed storage to maximise the use of cheaper heat, and allow distribution pipework to cool or turn off.

HIUs working together to manage loads, improving capacity of the network. 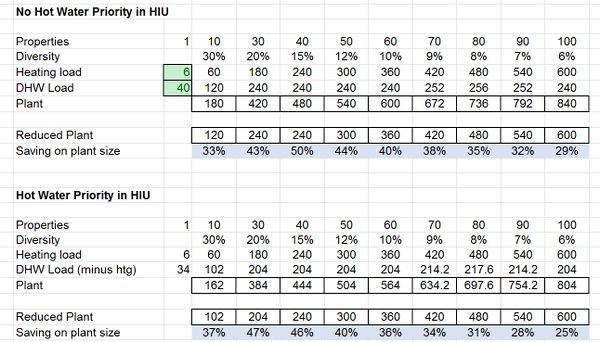