This article follows our investigation into the use of low cost camera technology to monitor water quality in heating systems by analysing the colour spectrum of the water.

The design has changed to use 2 standard high pressure steam inspection ports rather than attempting to develop new glass technology. One port is fitted with an RGB LED Matrix, and the other with the camera.

The camera takes a picture, which is then processed to provide close up enhanced images of potentially corrosive materials.

The average colour of the image is calculated to provide RGB values that can be tracked.

The LED colour is callibrated with clean water to level the RGB values detected, so deviance from 'pure grey' can be more easily seen. Without adjustment (using pure white on LED) the colour has a blue tint.

The addition of dye impregnated inhibitor to the system allows us to track inhibitor levels, while the enhanced dirt trap image helps track contamination. 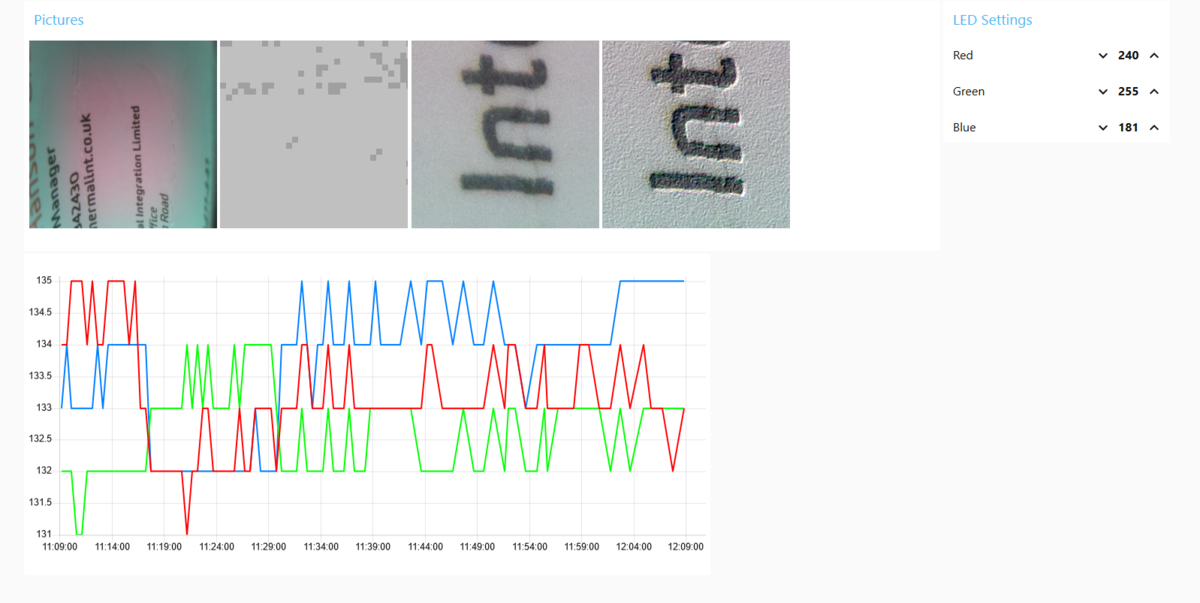 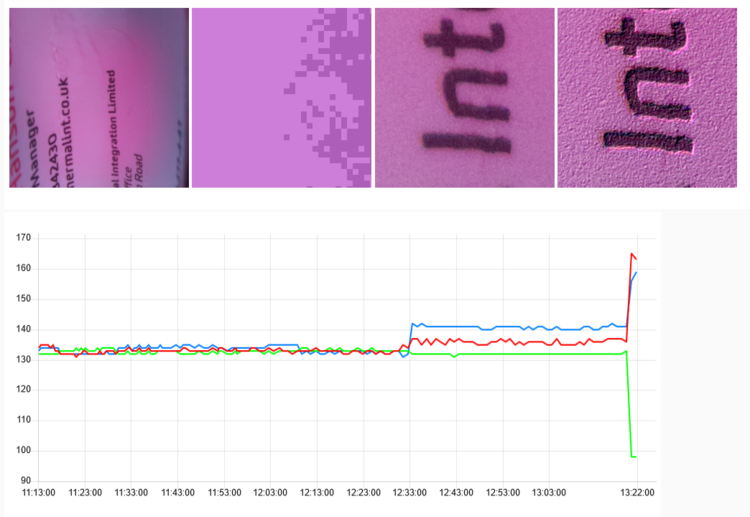 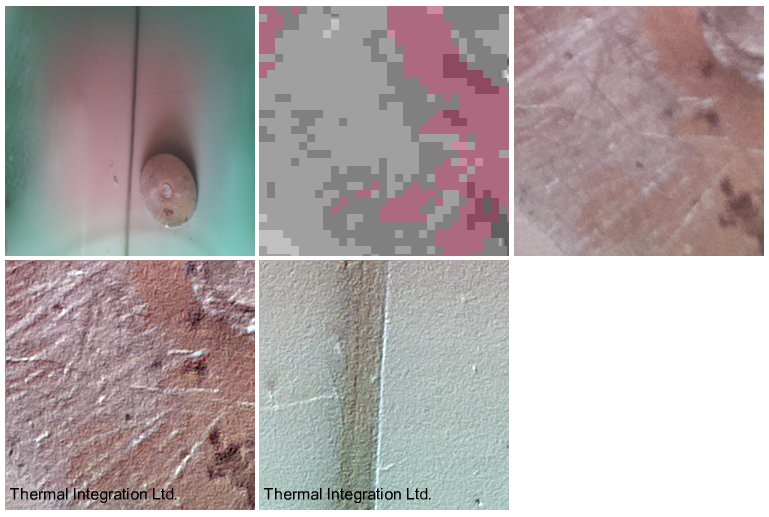 White plastic inserts holding a steel drawing pin an a wire are fitted, and unit filled with water

Photos every 15 minutes, timestamped and saved. Unit to be left for a week to see what happens. 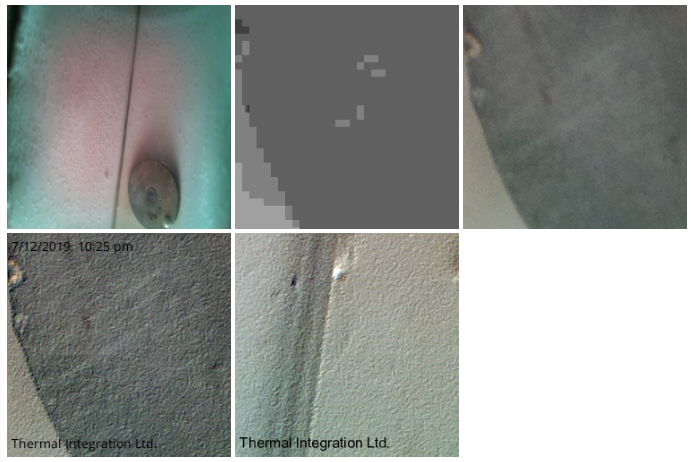 Within a few hours the drawing pin is rusting nicely. These 9 photos represent 2 hours at 15 minute intervals.

These images show two things. First, it only takes minutes for rust to start appearing. Secondly, we can easily detect it using our camera and measuring the colour shift. The 'nail in the jar' test works, and will be a valuable indicator of inhibitor effectiveness. 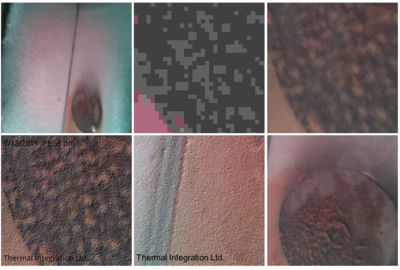 Half an hour later and levels of red are increasing significantly visually. 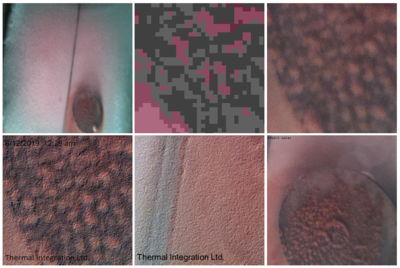 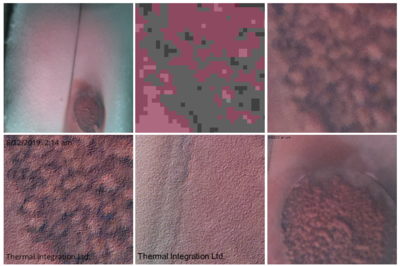 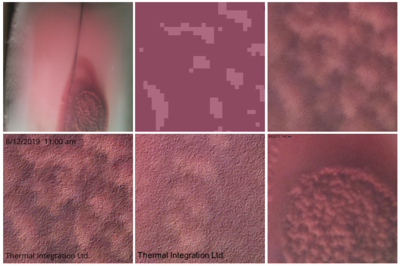 The final image is taken 12 hours after water was added.

Before and after clean water. 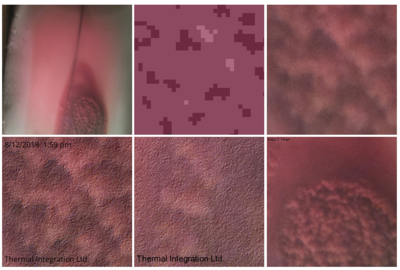 The rust has formed in stagnant water, where the iron removed from the pin head is not washed away and can form the coudy structires seen on the left and settle on surrounding surfaces, as well as in suspension. Once clean water is added, only the bonded iron oxide remains as a fer darker coating, and the image is back to near grey. 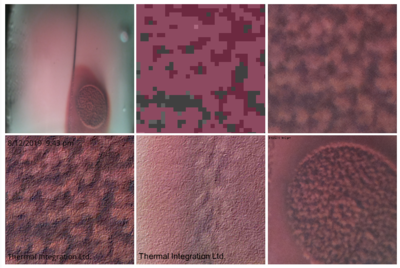 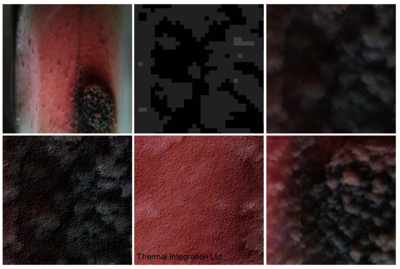 Given the speed of rusting, it is likely that a shiny new 'corrosion pad' will tarnish rapidly, and the test is one-way, requiring a new pin once rusted.

Therefore the final version will likely incorporate a rotating corrosion centre and brushes to remove rust at regular intervals so that the precise decay rate can be determined each time and the effectiveness of corrosion inhibitor can be continually checked without manual intervention.

Such a mechanism may not require a drive, but rather use a turbine driven by the flow of water at higher rates. When the device needs to be cleaned, flow rates are increased (via pump or valve) initiating rotation of corrosion centre accross brushes, and removing debris.

Simplest and most reliable is to use mild steel 3mm spindle, with turbine (fan) that an abrasive bore. Highest torque experienced at centre of turbine where shaft is kept clean by regular rotation of turbine, where the bore grinds off rust. The shaft is vertical with the turbine lifted by flow. At rest the turbine sits on non-corroside section of spindle.

A side benefit of a turbine if flow rate indication. Vertical position will provide some indication of flow, however rotation would be more accurate. Potential for 500 frames/second using camera, so it may be possible to film the turbine looking for coloured dots - colour pulse counting.

Now that the system has been demonstrated to work well with the new mechanical layout, the final assembly can be specified:

Equipment cost: £75 for Pi, case, sd card, camera, power supply. Glass not costed as it was left over from some Nutella.

Images captured then the centre 100x100 pixels are run through colour analysis.

Water with a small addition of Coca Cola

The colour of the water in the system can be determined.

Getting any focus to allow particles to be seen will take more research, possibly using a horizontal tube and placing camera 300mm away to get better focus.

Use of Dyes in Water

It was a thought to introduce a dye into the inhibitor added to systems to enable concentration levels to be measured. From conversations with Aqueous Logic, who have spent some time looking into the chemistry of using dyes in heating systems for this purpose, it would seem to be a bad idea. Dyes tend to react with other chemicals, may degrade at different rates, and can provide false indications.

RGB values of average colour can be plotted over time so can easily see changes in colour spectrum. Assumed that most contaminants will show up better in one particular colour band (i.e. rust = red).

If using a section of 100mm x 28mm toughened glass as a window, this can be setup in parallel with main pipework. Use of a motorised valve would enable flow to be isolated and then photos taken at intervals to watch sediment settle. The time it takes to settle may well provide additional data useful to determine quality of water. Similar to letting water stand in a glass and settle for a period. Heavy particles will settle more quickly, where dissolved chemicals will not settle at all.