This article describes the set-up, operation and problem solving of the pellet level sensor equipment that is used in conjunction with a remote hopper and auger installation where the auger feeds pellets from the bulk hopper directly to the day hopper on the appliance.

This equipment is designed to work with / control the 2.3 Meter auger;

The sensor equipment comprises a pre-wired box, a pair of sensors pre-wired to a plug, and a metal support bracket. The bracket is installed in the day hopper in the appliance, the sensors are installed onto the bracket and the plug fits in a socket on the wiring box. The box also has a socket for electrical plug for the auger. The internals of the wiring box comprise an On / Off power switch, connecting terminal blocks, and a double pole double throw relay.

The sensors are of a proximity type, which can sense the presence of objects or material in close relation to them, or just touching them, depending on the sensitivity to which they have been set.

They have a telltale LED light to the rear; When energised and they are covered, this light will be on (usually (but not always - see below); when uncovered this light is off.

The sensors are of the Normally Open type - i.e. if they are uncovered, their contacts are open and do not complete a circuit.

When the sensors are covered, they complete a circuit and are ‘closed’.

A further point to consider: The wiring arrangement inside the control system box means that the relay that delivers current to the auger motor is wired via the Normally Closed terminals - i.e. - when the relay coil is not energised, the auger will run: To stop the auger from running, the coil must be energised to break the normally closed contacts. This can be observed by disconnecting the plug with the sensors from the wiring box, plugging the auger motor in, and then switching the box on. The auger will run continuously as the sensors need to be both closed in order to energise the relay coil to cut power from the auger.

The following procedure should be carried out with the sensors freely to hand (i.e. not in their normal working location in the hopper) to aid easy adjustment of their sensitivity.

It is also useful to have a small container full of pellets to hand to immerse the sensors in.

NOTE: When adjusting the sensors, this must be done in small increments of a maximum of ½ turn at a time, stopping briefly to check if the state changes, then continuing as needed. Note the effect of turning in either direction as follows:

Connect the sensors to the wiring box and hold onto them either right by their base or carefully by their wires at the point that they enter the sensor base - holding onto the body may cause false readings and prevent correct set up & calibration. Ensure that they are separated from each other and from any surface by a minimum of 6” / 15cm, but preferably nearer 12”/ 30cm.

Turn the control box on: The small orange lights on the base of each sensor should Not be lit.

IF: The bottom sensor is lit whilst uncovered, this should be adjusted first.

Cover the bottom sensor and keep it covered; the light may or may not come on. At this stage it is not important either way.

Now cover the top sensor to confirm its light comes on: When doing this by hand, the light should come on just as the hand touches the end of the sensor. If it comes on as the hand approaches the sensor and there is still a small physical air gap between the two, it is slightly too sensitive. Move the hand away and now adjust the sensor by a very small amount anti clockwise (Maximum ¼ turn) and slowly:

Now repeat the test of covering the sensor: If still too sensitive, adjust slightly again (anticlockwise) It is imperative that adjustments at this stage are made slowly and in very small increments. Repeat this process until the light only comes on just as the end of the sensor is touched, and goes out again quickly after moving it away. The top sensor should now reliably activate as soon as it is covered (light on) and then uncovered (light off).

Now to check that both sensors active correctly and with each other:

If the auger is connected this should now run (or check for 230Vac at the auger socket terminals). If auger does not run and no voltage present, first cover the bottom sensor, then the top.

Reconfirm the correct operation of the sensors using the sample container of fuel. At this stage, both sensors should be uncovered with their lights out.

When performing this test, a valid result will be achieved by placing the end of the sensor onto the surface of the fuel sample, so it is in physical contact with it.

First place the bottom, then top sensors. As the top sensor touches the fuel, both lights should go out & auger stop. Now, uncover first the top, then the bottom sensor. As the bottom sensor is uncovered, the auger should start. Repeat a couple of time to ensure stable activation either way. If confirmed the calibration process is complete.

If at this stage it is discovered that they don’t activate reliably, then repeat / follow the process in STAGEs 1 & 2 as required to further adjust calibration as needed.

Once calibration is complete, the sensors can now be installed into the hopper as per the normal Installation Instructions.

If the sensors had worked initially but now do not trigger the auger, performing the correct sequence of covering & uncovering usually resets them. With the sensors in situ in the hopper, proceed as follows:

If not, then it may require observing the lights on the back come on & off as expected by temporarily demounting them. Depending on what is discovered, follow Stages 1 - 3 above as required.

A description of the operating logic and sequencing of the sensors is given in this document: 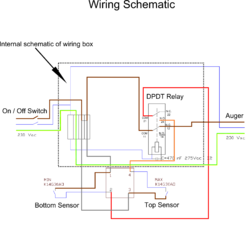