Best for through-life costs Intelligent design leads to greater simplicity – that’s why our systems are cost effective to install, more reliable and cheaper to run and operate.

Better by design Our unique and innovative technology has been refined over many years and is protected by numerous patents relating to water storage, heat exchange and the networking of communal heating systems.

Thermal Integration developed a customised version of the Pandora Heat Bank thermal stores to match the clients requirements, fitted with twin heat exchangers for efficient heat transfer, while also providing 150 litres of stored primary water with electric backup to both hot water and central heating. The development system was initially demonstrated to clients on a monitored test rig to ensure compliance with all requirements, from where WRAS approval was applied for. We have now supplied 354 fully approved systems that are installed and operating as expected. The Heat Banks at Queensland Road connect to a central CHP boiler system, with energy consumption metered and reported by a third party billing system. The Heat Banks were supplied fully pre-fabricated with all the system controls for rapid installation to pipework, and are unique in that they overcome the need for any discharge pipes in properties.

Given its proud role as the protector and preserver of our green and pleasant land and its aim to generate half its power from renewable sources by 2020, it is only natural that the National Trust would focus on researching and installing the very best renewable energy systems throughout its property portfolio in the UK.

An example of the progress being made by the National Trust is the heating system installed at Morden Hall Park in south west London. The scheme, which incorporates probably the UK’s most energy efficient historic building, the Stable Yard, uses both modern and more mature renewable energy methods. The property’s heat is supplied by the multifuel Xcel HEATBANK® thermal heating system, a wood-fired boiler and three different types of solar panels, as well as an Archimedes Screw, a more historic generator of energy, supplying the visitor centre and calmly generating power by churning the water of the River Wandle.

Thermal Integration co-ordinated all the renewable energy elements. The project was guided by Richard Hanson-Graville.

He described the initial discussions: “As you would expect there were a number of high-end companies and frankly new mindsets involved in the redevelopment of the Stable Yard. We had to demonstrate to the National Trust’s building surveyor, who had a HEATBANK® system, wood burner and solar panels actually installed in her own home, how we would adapt what she was used to, to suit this particular property.”

“We ensured that we maintained ongoing communication with all members of the project team including architects, low carbon consultants and the lead construction partner, as well as the providers of the underfloor heating, wood burners and heat pumps. Throughout the process, we were always aware of the needs of DEFRA and the health and safety requirements.”

The technical layout of the system revolved around the HEATBANK®. The system comprises two 475 litre HEATBANK® tanks, which are fed, depending on weather conditions and the time of year, by a mixture of solar panel, wood burner and heat pump, and work in tandem with an unvented hot water cylinder, which preheats incoming cold water using the solar
panels before sending it to the tanks. This provides continual inexpensive heat for the underfloor heating and the taps.

Richard continued: “In short the HEATBANK® thermal integration system stores renewable heat which can then be drawn off when it is needed and topped up as required via the heat pump. The banks and cylinder are neatly tucked away adjacent to the renewables showroom which attracts a steady flow of adults and school parties.”

Maureen Patel of the National Trust at Morden Hall is delighted with the results and commented: “The Stable Yard just used to be the storage area for our equipment and machinery. Now it has been transformed and we have restored the sensitivity of the area, whilst also generating our own power and becoming self sustaining in our own right. We are very conscious of our public role with initiatives such as the ‘Taster Days’ for renewable energy and checks by the Environment Agency to ensure everything is being run carefully and properly. The installation went very smoothly and the system pretty well runs itself, especially as we have so much here in the way of natural resources which cost us nothing.” 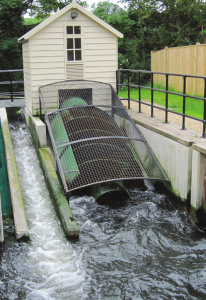 We have an extensive wiki site, designed to be a general resource for technical and detailed information relating to our products and services.